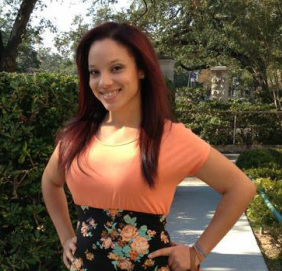 “Oh, my baby can sing, she can really sing!” was what my mom screamed out after we watched Disney’s Cinderella. I was in second grade and felt the urge to imitate the stepsister’s rendition of, “Sing Sweet Nightingale,” in front of all to see. Ever since that moment, I knew music would be an important part of my life.

Being born and raised in one of the most musical cities, New Orleans, it was easy to find various choirs for me to join along with performing in many musicals throughout my elementary and high school career. And after landing solos and leading roles in them, I quickly realized that no matter how much I pictured the audience naked or shut my eyes as tight as I could and pretended to sing like nobody’s watching, I could not shake my shaking knees or keep those butterflies in their cocoons.

So, I figured, if I couldn’t make a career out of singing because of my stage fright, I might as well surround myself with music and use my love of storytelling to write about the industry. I've explored and written about meaty, relevant topics within the music industry such as mom-and-pop music venues and street musicians and what it takes to keep them up and running with NOPD enforcing noise ordinances, musicians and their (lack of) access to affordable healthcare, and musicians often having the lack of education about their intellectual property and copyrights, how to register them, and how to protect other musicians from sampling their music without formal permission.

These topics have led me to be increasingly interested in music clearances and the business involved in registering music with the current Performing Rights Organizations and licensing music to film and TV. So, while studying Arts Journalism as a graduate student at Syracuse University, I decided to specialize in music supervision, licensing and publishing to understand both the creative and the business side of using music to accompany visuals. This concentration has driven me to found MusiCuse Central Library, the central database for Syracuse film/television/photo/advertising students to be able to download loopable original music for their visual projects that's composed completely of SU student composers. I've drafted the licenses between end users and the library, and come up with a system to categorize the music for students to be able to search and download music tracks for their student films, advertisements, promotional videos, etc.
​
Since MusiCuse, my focus has been on all things clearances. I've cleared all types of third party intellectual property (photos, footage, music, books, magazines, apps) for Viacom programming. This also entailed a detailed review of all scripts and segments before air to advise client groups of any and all clearance issues or concerns and then drafting and negotiating each type of license after the use to make sure they align with the rights, term, territory and fee initially requested. More recently, I have taken on a new role in the digital realm to review all YouTube Originals content for clearance issues or concerns concerning all third-party intellectual property that appears within each show.

While my experience is varied, it most centrally focuses on all things dealing with new technology and entertainment media, which is the place that feels most like home. With an M.A. in Arts Journalism with a concentration in Music Licensing and a B.A. in Communications and Music Industry Studies, I’m no stranger to both the communications field and the entertainment industry in regards to clearing and licensing all media and its trends.
​
I learn fast, take direction well and organize every aspect of my life. I'm also completely obsessed with the color tangerine, cell phone cases, CDs booklets, Degrassi, Supernatural, the Saints (Who Dat!), eos lip balm and of course, the beloved fleur-de-lis.

So, now that you know a little bit more about me, take a look around the site at my clips, photos, videos and designs to see a sneak peek at my work!